Part of the Desert Migrations Project, DMP-PALAEO investigated the distribution and time-depth of prehistoric occupation in the Central Sahara, thus contributing to building a temporal and spatial picture of the ancient green corridors of the Sahara. The aims of DMP-PALAEO were to map the landscape archaeology across a segment of the Sahara – focused on the Fezzan in southern Libya, in order to investigate whether the region was a stepping stone in a dispersal corridor between the Sahel and the Mediterranean. DMP-PALAEO carried out 5 field seasons of survey and excavation in Libya between 2007 and 2011, and its findings were complemented by those resulting from the intense heritage mitigation survey supervised by the PIs of the DMP and funded by OXY Oil Plc.

The project was supported by a grant from the Society of Libyan Studies (DMP) and the funds from a Philip Leverhulme Prize to Marta Mirazon Lahr. 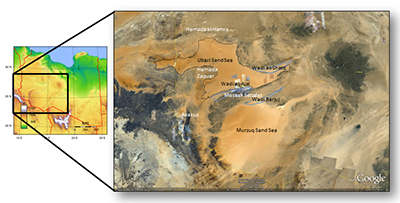 DMP-Palaeo project aimed at mapping the archaeological evidence of hominin and human occupation in Fezzan in relation to the palaeo-hydrology of the area. The target area was the northern half of Fezzan, represented by the Ubari Sand Sea (Edeyen Awbari) and its surrounding highlands. The Ubari Sand Sea consists of a large contiguous area of high, mostly longitudinal dunes. The Ubari sands are bordered to the South by a the Messak Settafet, which separates it from the Murzuq Sand Sea. The Messak Settafet is a mountain of Mesozoic origin that forms a steep escarpment to the North, marking the edge of the Wadi al-Ajal, and tilts gently to the South. The northern margin of the Ubari Sand Sea is shaped by the Hamada al-Hamra, the desert plateau that extends towards Tripolitania. Its western margins are difused, being partly found in Algeria (NW), or marked by the low Hamada Zaquer (W), or the Akakus and Uan Kasa mountain and sand ranges (SW). Finally, the eastern margins of the Ubari sands converge onto a narrow strip of sand that forms the Wadi as-Shatti, and which ends with the Haruj volcano. The total area of the Ubari Sand Sea is ca. 60,000 km2.

In the course of 5 field seasons (2007-2011), we surveyed a range of eco-zones along the margins of the Ubari Sand Sea, targeting wadis that cut the edge of the hamadas and/or the Messak Settafet escarpment, and small, medium and large palaeolake basins at the edge of the Sand Sea and in interdune corridors within the Sand Sea. 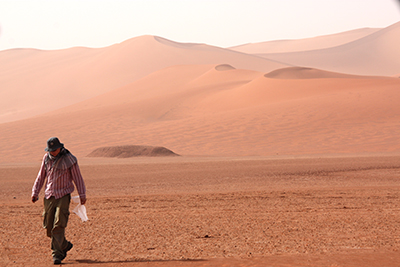 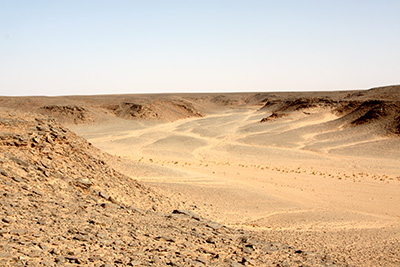 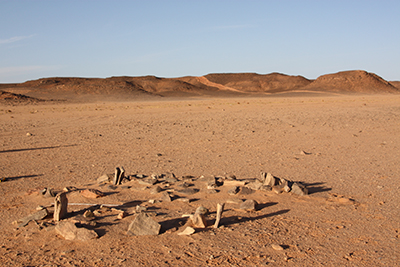 Within each of the areas defined, one or more localities were selected for surveying. Localities, as defined in this project, normally represent a geo-morphological unit (interdune depression, basin, terrace, small wadi) in which archaeological remains of one or more periods may be found. In cases where the landscape is less clearly demarcated into distinct geo-morphological entities, localities were defined by size of area (for example, sections of large wadis, circumscribed areas within flat plateau surfaces, etc.) . The depth of survey of different localities depended on time – before each expedition, target areas were defined, where a small number of localities were surveyed in depth. However, in order to maximise the mapping of the archaeological distributions, every point at which the expedition stopped between the target areas was surveyed, some very briefly, others more systematically.

The survey of localities was normally carried out through one or more transects, along which archaeological remains are recorded using a hand-held GPS, each representing a find-spot. The length, width and number of transects was established once a locality was reached according to the nature of the landscape, the richness of the archaeology and the time available.

All the information collected during the surveys and from the lithic quantitative analyses carried out at the Museum in Jarma was entered into the project’s database and GIS system. The information is organised by areas, localities, find spots, and individual lithics, these separated into cores and flakes. The GIS system uses satellite imagery from GoogleEarth and localised high-resolution tiles provided by Oxy Oil Plc.. 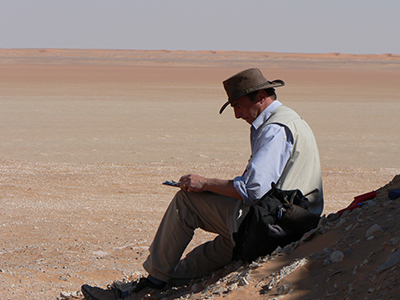 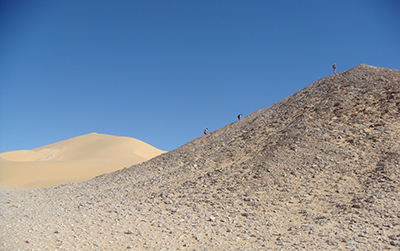 Areas surveyed during the DMP-Palaeo project 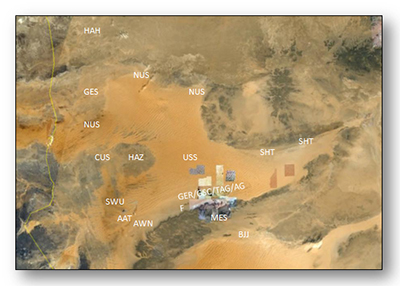 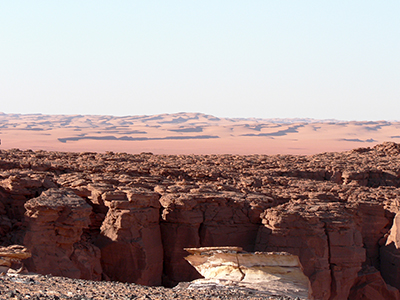 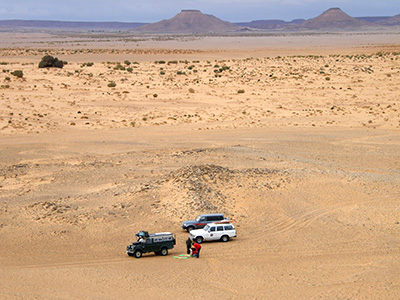 We surveyed 3 areas at the North and Northwest of the Ubari Sand Sea:

We surveyed 5 areas to the West and Southwest of the Ubari Sand Sea: 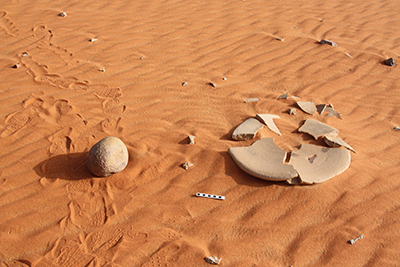 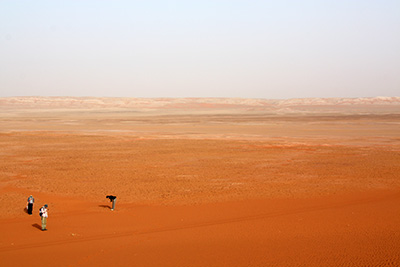 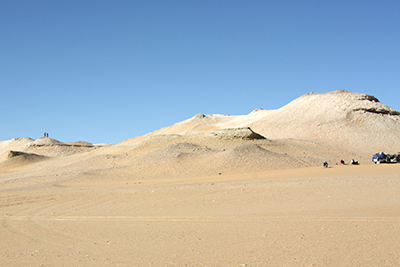 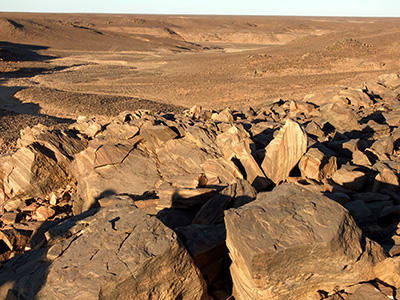 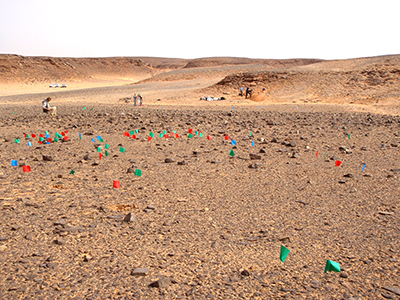 Most of the archaeological research carried out as part of the DMP-Palaeo Project was based on the concepts and methods of Off-Site Archaeology (Foley 1980). Rather than pre-defining sites, these methods use the overall distribution of artefacts across the landscape to build a picture of differential exposure, preservation, and landscape use. Off-site approaches are ideal in exposed landscapes, such as those of the Central Sahara, characterised by areas with a relatively continuous and dispersed distribution of surface material, and where geomorphological/geological context is critical in the absence of well-stratified sediments. DMP-PALAEO used several sampling strategies, depending upon local conditions and circumstances when each locality was visited. 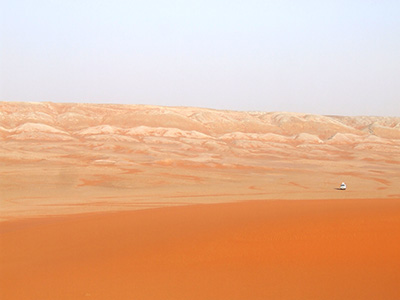 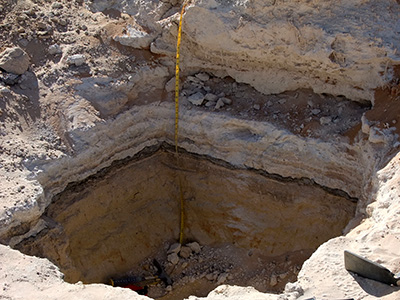 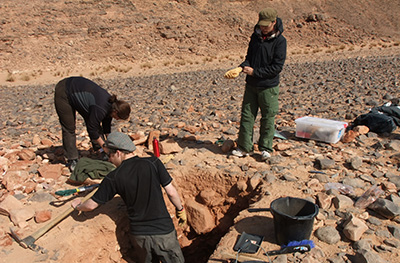 Given the deflated nature of the landscape and the survey aspect of the project that necessitated covering large geographic distances, the scope for excavation was limited.

These were carried out to

Excavations were carried out using stratigraphic methods, with sieving where appropriate.

Several off-site transect types were employed, depending on conditions

Point Transects: 10, 20, and 30 metre-wide point transects, in which any material was GPS-registered, its context noted, and all material collected for further study. Length of transect varied according to context, normally varying between 0.3 and 3 km, although transects of up to 20 km were completed. Often several point transects were run in parallel, or at diverging angles

Grid transects: were used in areas with moderately dense material. In this case, a transect was gridded in 10 x 10 m units, and material collected in these units, along with contextual information. Grid transects are practicable for short distances of up to 0.5 km

Density transects: were used where an extensive and rapid measure of artefact density was required. In this case, a transect of any length was carried out, and all surface lithics were counted at fixed intervals to calculate the local artefactual landscape density, even if full details of the artefactual material were not recovered. Density transects can be easily combined with other, more intensive sampling

Intensive transects: were used when material was very localised and dense, for example on duricrusts. In this case, the entire sample region would be surveyed and material GPS-registered as individual finds, or small, medium or large scatters, and artefacts collected.

Off-transect: where material was encountered off transect it was noted, a GPS point taken. Collection took place when the find was significant, indicative or vulnerable 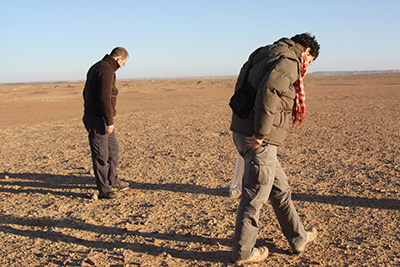 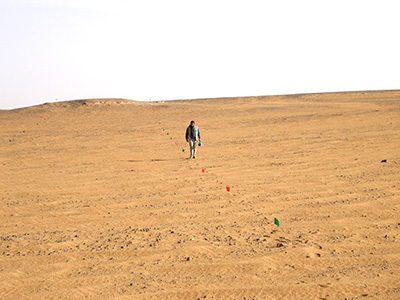 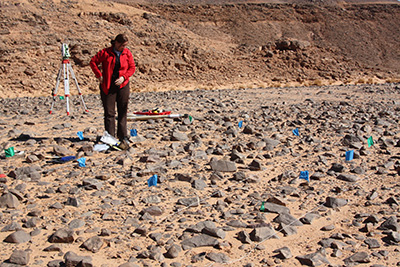 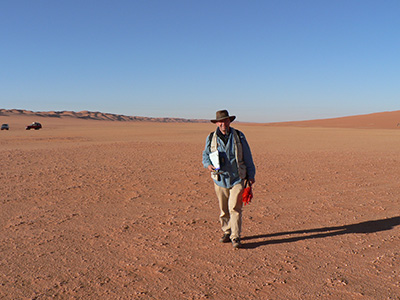 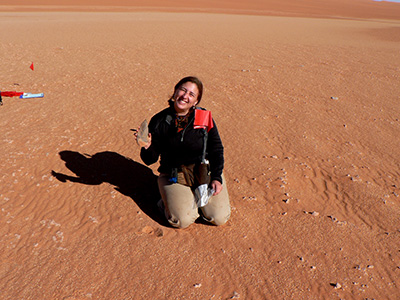 The different transect systems were combined with a number of collection strategies: 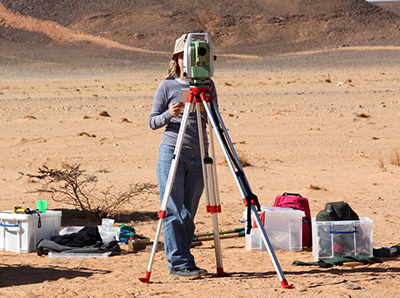 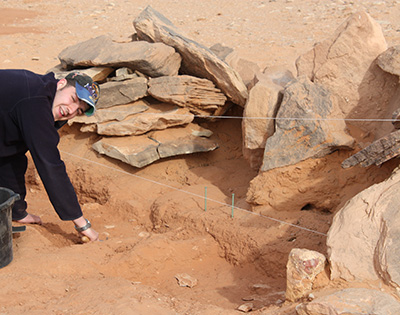 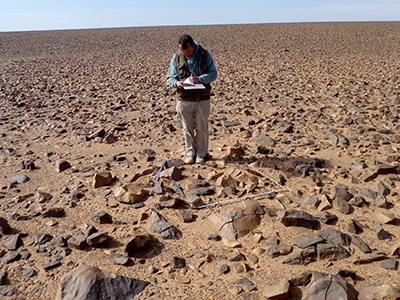 Full GPS sampling: where all observed material was collected, with detailed GPS location of all artefacts, whether independently to within a 3 m radius or individually registered using a Total Station

Full grid sampling: where all observed material was collected from grid units, often 10 x 10 m, although smaller and larger units were sometimes used

Selective grid sampling: where only significant and diagnostic material was collected from grid units

Full transect sampling: where all material observed along a transect was collected as a single sample unit (with individual artefacts and/or scatters GPS-registered), noting the level of density and radius of each scatter

Selective transect sampling: where only significant, diagnostic or vulnerable material found along a transect was collected (as a GPS-registered single sample unit)

High density sampling: where the quantity of material was very high and area-wide sampling was not possible, we collected 100% of surface, and sometimes sub-surface, artefacts within one or more 1 m squares. 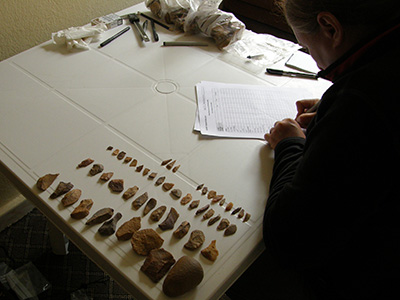 The analysis of lithic artefacts collected during DMP-PALAEO implemented the analytical methodology initially developed  Rob  Foley during the DMP – Universal Lithics – based on the combined use of attribute analysis, measurements and graphic representation to obtain a comprehensive measure of techno-typological features. 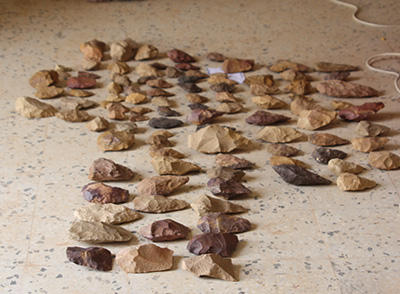 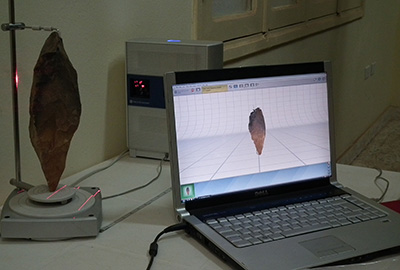 Prior to analysis, all artefacts were individually labelled using, sequentially, the locality code, the find-spot code and number (if present), and the artefact number.

A selection of bifaces from across all surveyed areas was also surfaced scanned to generate 3D models of the artefacts.